Most of my backpacking and long distance walks have been done solo over the years, mainly because, in the early years at least, I didn’t know anyone else who wanted to hike for more than a day or two. Sure I knew of people who hiked long distances – in fact it was Chris Townsend who inspired my first attempt at hiking the Pennine Way over 30 years ago – but I didn’t know anyone in my social circles who shared my love of hiking. So, for many years, I tramped across Britain and a handful of European countries alone and enjoyed every moment of these treks, never feeling alone hiking solo and always dreaming of longer solo adventures.

It wasn’t until I discovered Twitter over 6 years ago that I realised the possibility of hiking with other people who shared my passion and, in the past few years, I have hiked with quite a few different people I’ve met through Twitter and other social networks. These hikes have been rewarding in so many ways and I have made many good friends through social media and count Stuart Greig, whom I met through Twitter (aka @LoneWalkerUK), as one of my best friends and hiking buddies today. And, for shorter hikes, the camaraderie walking with friends brings is without peer. However, it wasn’t until I finally completed a thru-hike of the Pennine Way earlier this year that I realised that I am, at heart, a solo backpacker when it comes to long distance hiking. And not because of the lack of hiking companions that had dictated my earlier solitary hikes.

The Pennine Way has always been my nemesis trail and finally completing a thru-hike of it was very satisfying. However, there has been something bugging me during the few months that have passed since I defeated my nemesis. The hike itself was wonderful, the weather was surprisingly good and I met and walked with a lot of great people along the Way, but during the hike there was a niggle that was beginning to worm its way into my thoughts. 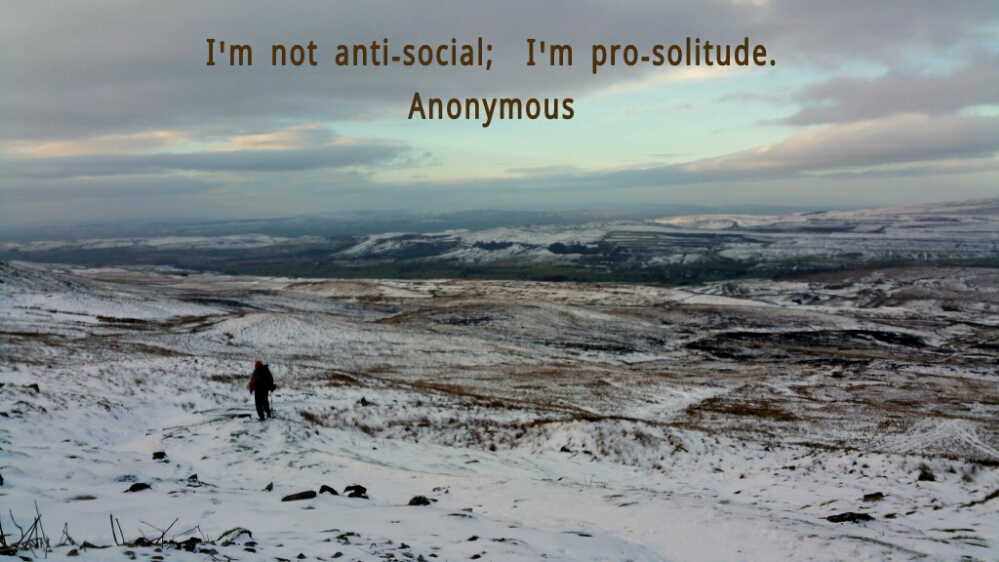 We are, by nature, social creatures and, from a young adolescent to later a twenty something year old, I socialised a lot. Or, more accurately, I partied a lot! I drank heavily in those days and smoked like a chimney and, whilst I didn’t do hard drugs, I did partake of cannabis occasionally when offered at parties. The weekend meant pubs, clubs and parties and often I would go out on a Friday night and not return until sometime Sunday. I just loved being around people letting loose and having FUN! My backpacking excursions became few and far between and I thought I was happy in my hedonistic little world. But there was always something ‘false’ about this lifestyle; something I couldn’t put my finger on, but which left me feeling unfulfilled.

I then married, had two children and my social life changed dramatically as was to be expected. I stopped partying, didn’t do any long distance backpacking and settled into married life. I started my own business during this time, took care of my family and again thought I was happy: more than happy in fact! But there was still something not quite right about my perception of the life I was living. It was my wife who felt this unease most acutely and eventually ended this lifestyle. It was a difficult time!

Single again and responsible for two young children I was now living a very different lifestyle dominated by raising my children, work and a deep sense of failure. I no longer thought I was happy! My children were both my only joy and consolation. However, the sense of being ‘false’ and something not being ‘quite right’ were coalescing into a revelation of the cause of my disquiet throughout both my partying days and my married life – loneliness.

Loneliness: a difficult concept for me to understand, that, during most of my life, either surrounded by friends during my misspent youth or ensconced in the warmth of married family life, I had been lonely. Of course I wasn’t alone, but loneliness, as I was experiencing it, had nothing to do with being in the company of other people; even people who loved me and whom I loved. No, the loneliness I was suffering from was that bought about by a lack of solitude. Now if you thought that feeling lonely whilst being in the company of friends and loved ones seems contradictory then what must you think of the revelation that solitude was the answer to my loneliness? 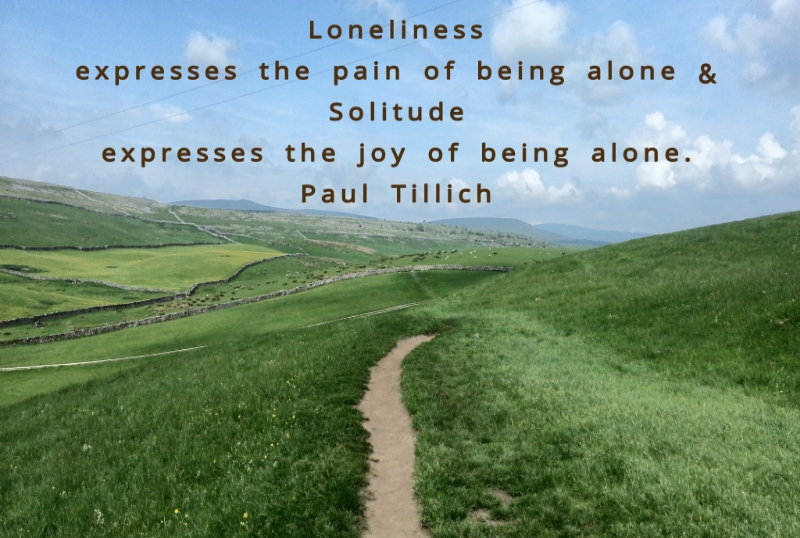 Let me try and explain, at least to myself if to no one else (writing does sometimes help bring a clarity to my thought processes that simple ‘pondering’ doesn’t). Back in my youth – pre ‘partying’ days – I was a child always seeking acceptance of my peers: acceptance of what exactly I had no idea back then. Through the ‘wild’ days of my late teens to mid 20’s I took this need to be accepted to more extremes, although I still didn’t know I had such a need at the time. Or at least I didn’t understand what the need was. There was something strange in hindsight though: it was only during the times after the nights out, the partying or the general socialising that I felt more at peace. What’s more, even during my marital years, it was really only during those times I found myself alone that I truly felt at peace with the world. That’s not to detract from the love I had for my then wife, or the boundless joy and absolute love I had, (and still have!), for my children: as I mentioned earlier, these were the happiest times of my life. It was the sense of loneliness throughout all these stages in my life that I couldn’t shake and these thoughts didn’t really make any sense until I was hiking across the Pennines earlier this year.

What I didn’t mention earlier was that the Pennine Way backpacking adventure I undertook this year was planned as a solo hike. I had hiked the South Yorkshire Way solo in February and hadn’t met another hiker during the entire 10 days of walking and had not felt less lonely since the early years of solo hiking. So I planned on capturing that solitude again as I walked the Pennine Way. What I didn’t plan on was the sheer number of people hiking the Way during its 50th anniversary year. I should have known of course; after all, I had been promoting the anniversary year of the country’s first national trail for months prior to my own walk and shouldn’t have been surprised to find myself in the company of fellow hikers on only the second day’s walk. To be fair I didn’t mind at first as it is always interesting meeting new people on a shared adventure, swapping stories and creating bonds through common purpose. However, as the days wore on and the Way swelled with people I found it increasingly difficult to find the solitude I sought. I began to feel that familiar, peculiar loneliness that comes with being too long in the company of others and, furthermore, this paradoxical situation was of my own doing! I could have walked on my own if I really wanted to, but the draw of new people and new conversation was beguiling. Non of this made me feel in any way sad or uncomfortable; it just started that niggle I talked about earlier, the slow realisation that my way from loneliness was in solitude. 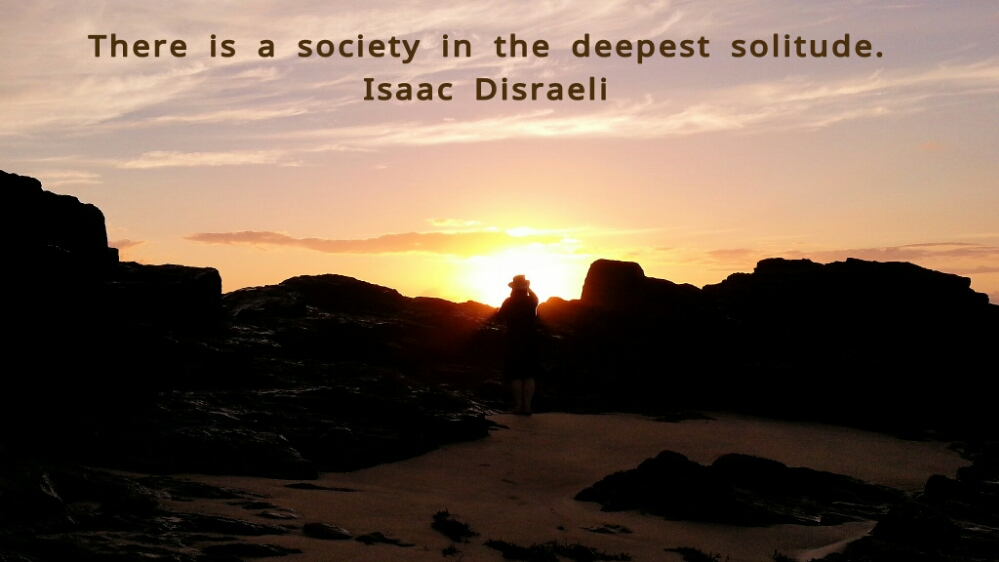 In the months since my Pennine Way walk I have explored solitude in more depth. I had begun this process in the years after my divorce when, after my children moved in with their mother, I embarked on a simpler lifestyle that involved me discarding material things that seemed to promote my loneliness. But it wasn’t until after my Pennine hike that I began dismantling a lifestyle that distracted from the solitude I sought.

I moved home and now live, for the most part, in a caravan in a secluded spot in the depths of the Yorkshire Dales; the nearest shop being 6 miles away, my immediate neighbours being sheep and with only a 13 house hamlet as the nearest settlement (it does contain a good pub though!). My main source of work is in another hamlet some 12 miles away and the only ‘rush hour’ traffic I encounter on this 25 minute car journey is the occasional cow or sheep walking on one or more of the narrow Dales roads I travel over to my place employment. My work revolves around my love of walking and I am fortunate to now earn a living out of my passion for the outdoors. The upshot of these lifestyle changes is a growing sense of solitude and peace and the loneliness I have tried to explain is dissipating.

I have come to realise that, whilst I love the company of others, I am, by nature, a solitary person. I do enjoy my social interactions, both in the physical world and the digital, and yet I am always drawn back to solitude. As for my future backpacking adventures? Well I have many lined up – a fair few of the shorter ones with friends. But, the longer trips I am planning will be undertaken solo. Only being on my own for days, weeks and even months at a time can stop feelings of loneliness niggling away at me and the solitude of a long distance backpacking adventure is never lonely!

As Anneli Rufus – the author of Party of One: A Loners’ Manifesto – puts it, for some of us solitude is “just what we need, the way tuna need the sea. Here we are, not sad, not lonely, having the time of our lives.” Being alone, she says, “feels calming to me, and invigorating, and most of all ­normal”. I couldn’t agree more!

Edit:
My good friend Stuart Greig, mentioned above, has written a stirring blog in response to this one of mine. It offers a different perspective and a different conclusion to his own thoughts on solo hiking. I recommend reading it, it’s called Changing Times

8 thoughts on “Loneliness and the Joy of Solitude: Thoughts of a Solo Backpacker.”