Before you read my latest blog post may I suggest you go put the kettle on? All will be revealed in a couple of minutes ☺ 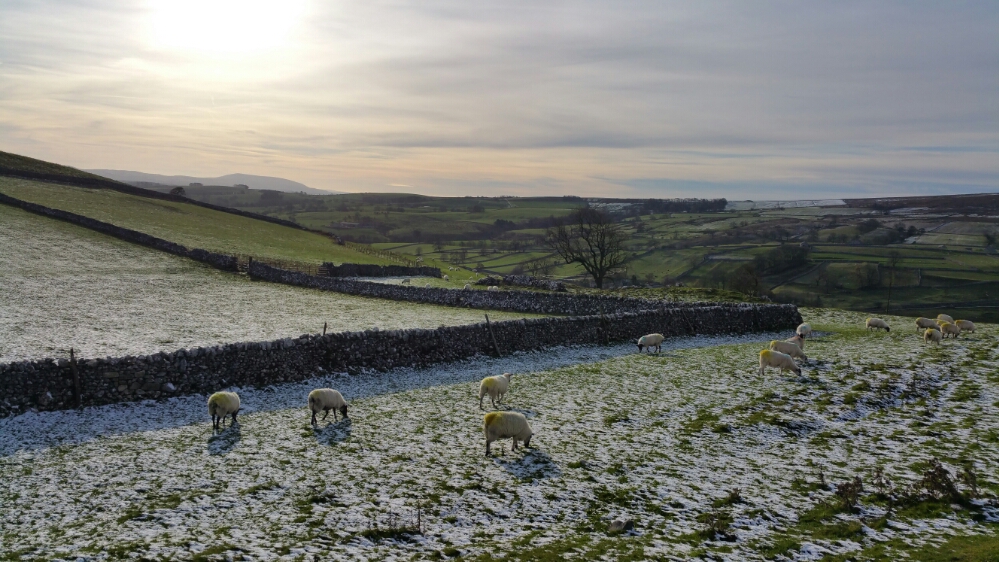 It had forecast snow and indeed I could ‘feel’ it in the air on the afternoon of Friday 20th November. The temperature had dropped steadily over the previous day or two, but, when I stepped out of the Brigantes office in the tiny hamlet of Halton Gill in the heart of the North Yorkshire Dales at around 4pm that afternoon, the cold really was biting. There was a stillness to the air that, combined with the cold, gave my senses that particular tingle that portends the arrival of the white stuff.

Tomorrow would be Saturday and I had planned to work on some new walks I was devising to add to the company’s portfolio. It would be quiet in the office with just me there and besides, I had nothing else planned. Heading back to my caravan that Friday evening there were already squalls of snow gusting over the high road from Arncliffe forcing me to switch my car’s windscreen wipers to their fastest setting! Normally I might have been tempted to stop off at the Falcon Inn in Arncliffe (the original Woolpack of Emmerdale Farm fame) for a pint and a natter, but knew if the snows came in earnest then I might be forced to stay the night as the roads would become treacherous. So I continued on my journey marvelling at just how beautiful the Yorkshire Dales looked on this stark winter’s evening with the flurries of flakes dancing in the light of my headlamps and the moonlight illuminating the already settling snow. 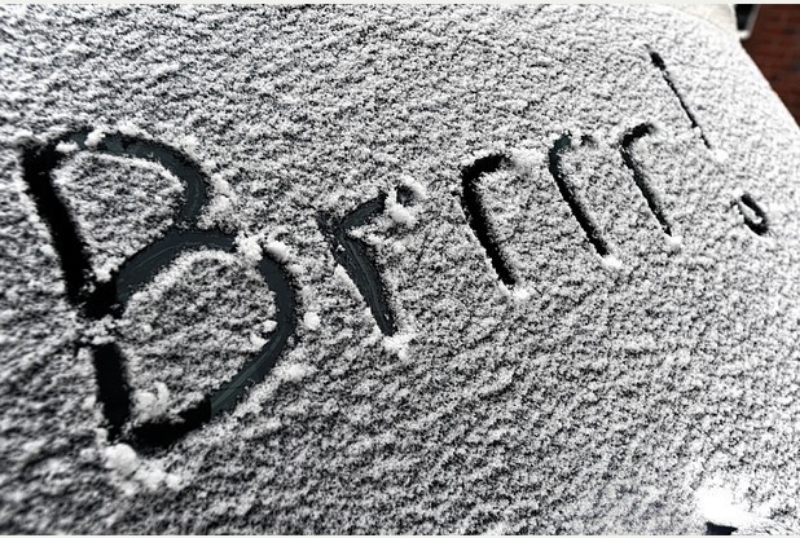 I awoke the next morning to the following message from my boss.
“Don’t try and get over the top you won’t get here. The roads haven’t been gritted and you will end up in a wall, it’s not safe.”
Expecting to be snow bound I looked out of my caravan window I saw little snow; but then I was down in a valley and knew from a previous near mishap involving icy roads, my friend Stuart and his car that wouldn’t stop sliding downhill backwards that the conditions on the top roads could very well tell a different story.
There was an alternative low level route to the office, admittedly a longer journey, but, on the face of it, a much safer one so, determined to spend a few hours researching new walks for the company in peace, I set off. However, I was to be thwarted again by something other than snow blocking my progress! 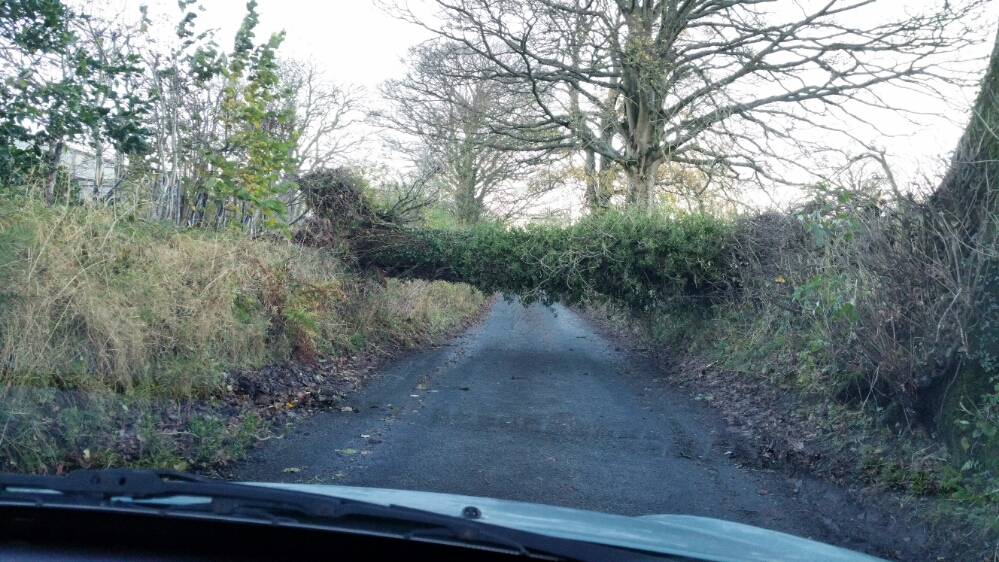 Come to think of it I DO remember being woken up at about 3am that morning to what sounded like the roof coming down! It wasn’t far from the truth either. Now I’m normally a sound sleeper and have slept through gales whilst wild camping on Kinder Scout one eventful New Years Eve; through morning rush hour commuters at Manchester’s Piccadilly Train Station picking their way over and around my slumbering form on the concourse (a back story not for the faint hearted!) and through the teething years of my two children! but the sound of corrugated iron, from the roof of a nearby barn, screaming in protest at the wind before giving up the battle and crashing against my caravan was enough to wake the dead. Or frighten someone to death! After trying to beat it’s way out of my chest my heart had found an alternative escape route and was now firmly in my mouth!

So that explained the fallen tree across the road in front of me. Whilst I may have been sheltered from the snow down in the valley, the surrounding hills had been the perfect playground for the winds that had been ricocheting off them in wild abandon before being forced along the narrow, tree lined roads in the low Dales. I was destined not to make it to the office that Saturday morning after all! 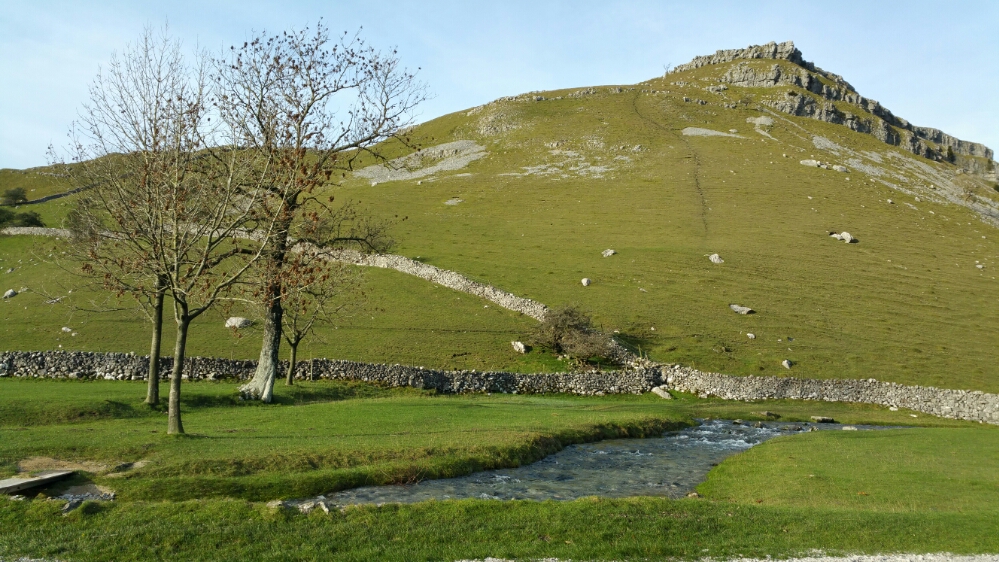 However, the morning was bright, crisp and clean and the wild winds of the night before had abated with just the occasional tug at my hat to remind me that, at this time of year, they would never be too far away. Deciding to take advantage of the free time I now had I returned to my caravan,  donned my walking gear and set off for an impromptu walk in the glorious area of Malham.

As always I took my mobile phone to take photos and video clips of my walk. The kettle you put on earlier should have boiled by now so go make a cuppa, sit down, and relax for 10 minutes as I invite you to come and join me on my video walk from Kirkby Malham to Malham Cove taking in Janet’s Foss and Gordale Scar on route. Oh! And the tightrope walking mentioned in the title of this blog? Well press the play button and all will be revealed ☺

One thought on “Snow, Winds and Tightrope Walking in the #YorkshireDales”