A few weeks ago a Twitter friend of mine, Rucksack Rose, put a post on Google Plus asking if anyone would like to join her for a camping weekend – more specifically, a wild camping weekend. Now as quite an experienced hiker RucksackRose recently completed a solo hike of the Pennine Way where she camped using campsites, but Rose had never wild camped before and wanted the reassurance of camping with a few friends for her virgin wild camp. As a male who has wild camped alone for many years Rose’s request highlighted the very real concerns that some women can have when hiking and camping alone. Indeed some guys can feel nervous their first time camping alone in the great outdoors, however women can have other concerns that a male simply wouldn’t consider. So I readily agreed to RucksackRose’s request to accompany her on such a momentous occasion (if you remember your own first wildcamp you know it IS a momentous occasion)

Initially Rose had thought of the Cheviots as a good choice to break her wild camping virginity, but those people who could make the dates for the trip considered the logistics too problematic – travelling times would cut into hiking time too much – so we decided on the Peak District instead. The ‘we’ I mention were Rose known as @RucksackRose on Twitter, myself of course, Stuart Greig  known as @LoneWalkerUK on Twitter and Matthew King  known as @hillplodder on Twitter. Also joining us for the first night was my great friend Dean Read (also known as @dean_read on Twitter) who would have to leave us at 5am Saturday morning as he had to get to work. So with dates and location for the weekend adventure agreed all I needed now was to get to the meeting point which was the famous Cat and Fiddle Inn. 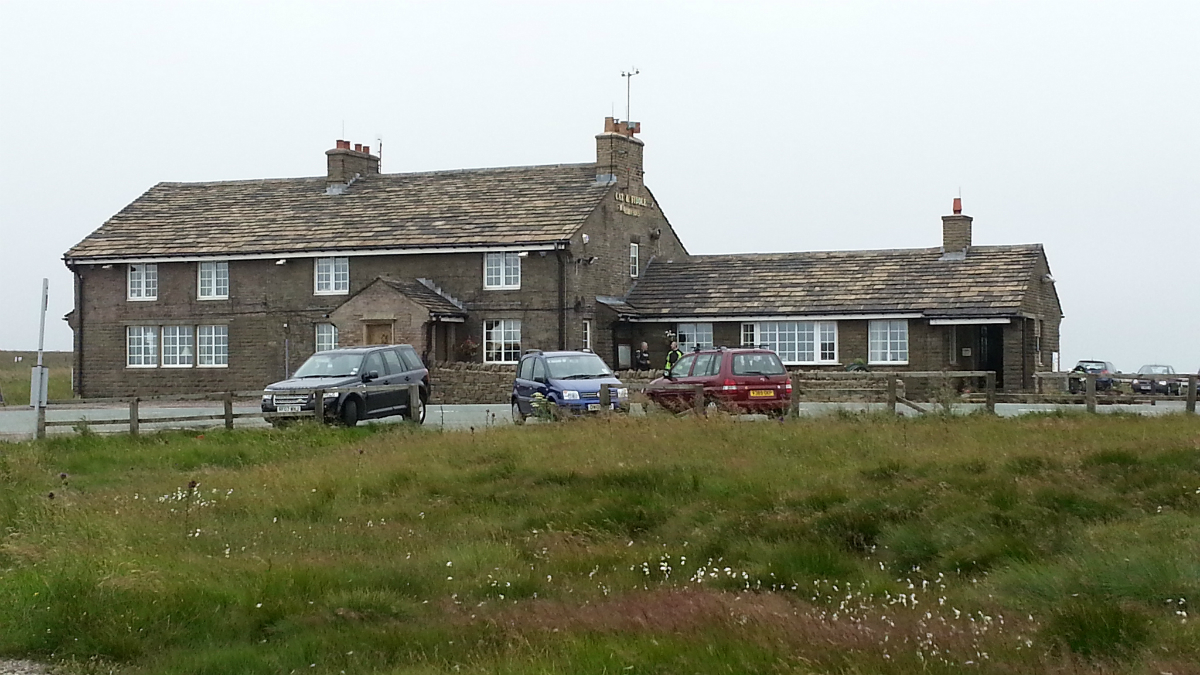 “The Cat and Fiddle Inn is the second-highest inn or public house in England (the Tan Hill Inn being the highest). The inn is situated on the eastern fringes of Cheshire in the Peak District National Park on the A537 road just west of the Derbyshire/Cheshire county boundary, on the western side of Axe Edge Moor.” (Source: Wikipedia

Stuart had kindly offered to pick me up from my home after another friend, who was initially joining us and who would have given me a lift, unfortunately couldn’t make the trip after all. Stuart had collected Matt from the train station on his way to me so the three of us set off on the Friday afternoon for our rendezvous with Rose and Dean at the Cat and Fiddle Inn.

My inner tent on Shining Tor 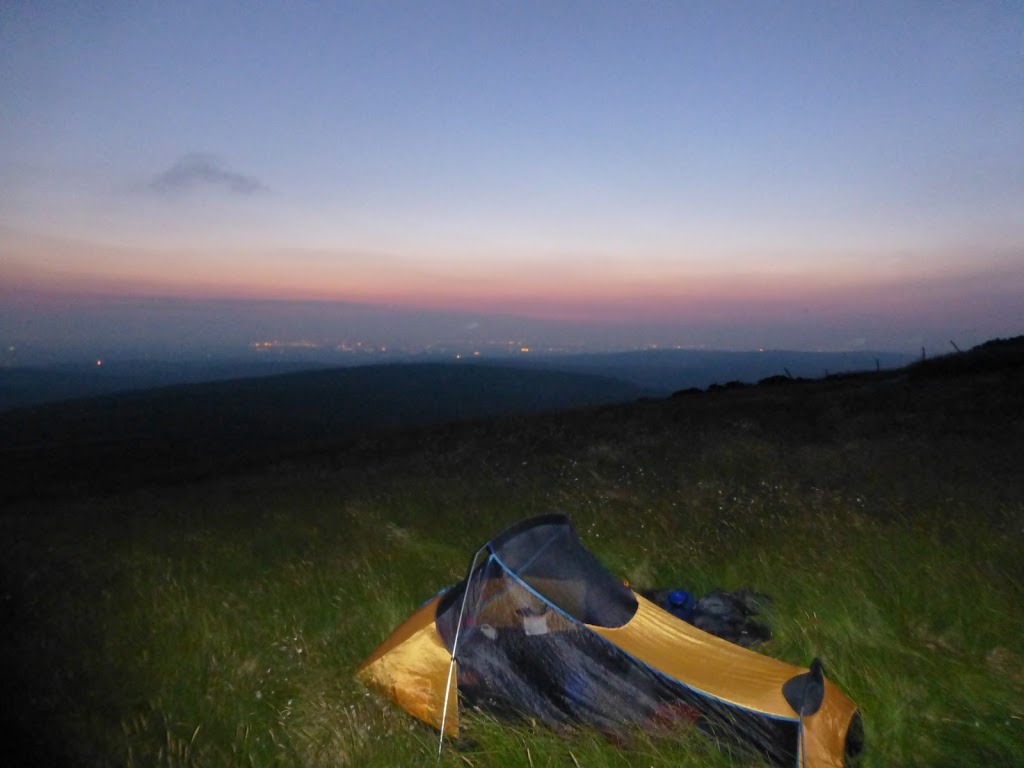 After introductions and hello’s (and, of course, a pint of ale) the five of us left the pub and heading off into the setting sun we took a leisurely walk to Shining Tor. It was great to see Dean and Stuart again and finally to meet Matt at last after failing to meet him on two previous occasions. And of course to meet the lady we were all here to support – RucksackRose! After taking the obligatory photos of the trig point on Shining Tor we quickly found a spot to set up camp for the evening and settled in for supper, conversation and, surprise, a shot or two of Jamesons courtesy of Rose! The lady certainly knew how to impress us lads!
Dean had been recording some video as we made camp and, by kind permission, I have embedded it into this blog so grab a brew, sit back, and enjoy a few moments with us on Shining Tor!

I woke the following morning around 5.45am to find Dean already gone of course – I hadn’t heard him leave. It was great that Dean had joined us for Rose’s maiden wild camp and I was thankful for him that it didn’t rain in the night as he had slept cowboy style in just a bivvy and bag! Mind you, I wasn’t overly protected from the elements myself, electing to take just the inner netting of my tent to save weight, yet still ‘protect’ me from any bugs. I confess to having a disproportionate dislike for all ‘creepy crawlies’ such as the little blighter you can see crawling on the outside (thankfully!) of my shelter in the pic below! 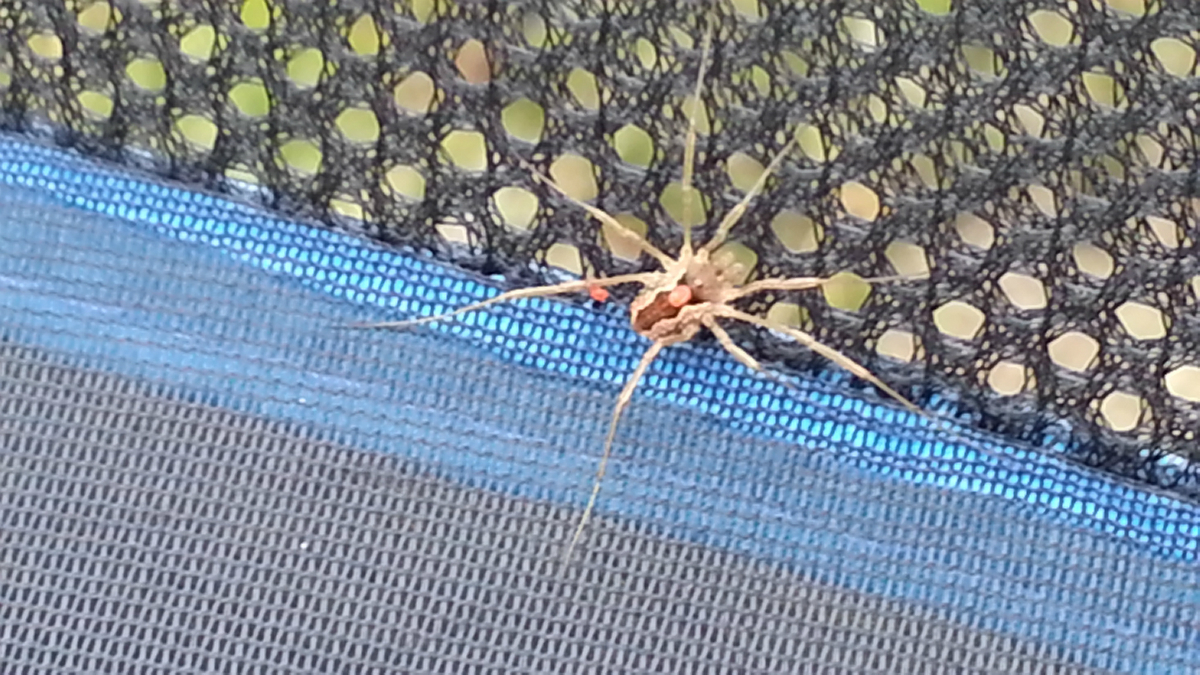 As I boiled water on my current favourite stove – The Backcountry Boiler – I set about packing my gear whilst the others slept before enjoying a coffee and porridge as I gazed into the early morning mist. This is my favourite time of the day when out in the hills. I love the peace, the solitude and the rest my mind, body and soul feels in the early hours of a morning surrounded by Mother Nature. Yes, even the ‘creepy crawlies’ don’t faze me at this time of the day – probably because they are all asleep 🙂
Eventually the others started to stir – I am a very early riser – and I was keen to ask Rose how her first ‘wild camp’ had been. You can read her account of her first wild camp on her own blog here – RucksackRose: My First Wild Camp 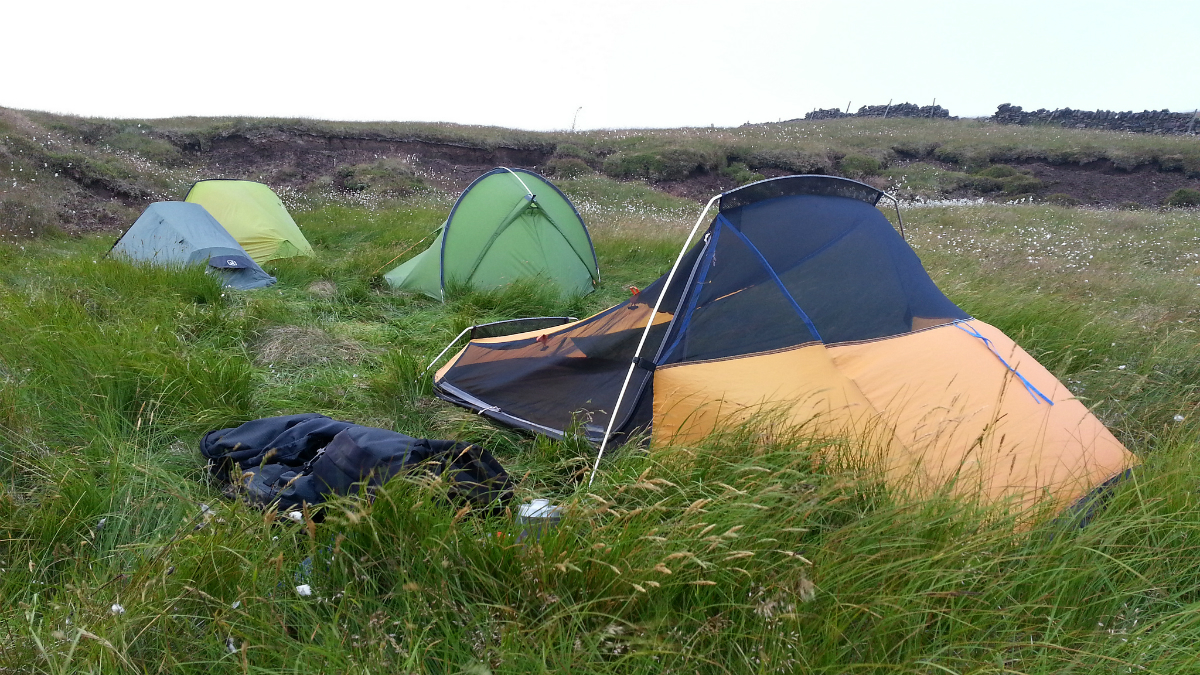 Assured that Rose had slept peacefully we chatted whilst everyone had breakfast before we broke camp and set off for a potential 15 mile hike on a route devised by Stuart. The proposed route was circular and would bring us back to the Cat & Fiddle pub in time for lunch on Sunday after hiking a further 4-5 miles Sunday morning. But today was Saturday and whilst the weather had cooled a little from the previous week’s heatwave and the cloud was low, it was still rather warm and was set to get warmer as the day progressed.

Leaving Shining Tor we headed north along the ridge towards Cats Tor whose summit is marked by a rather pathetic pile of rocks that took a few minutes to locate. We decided to add a few rocks to the pile in time honoured tradition before skirting the western edge of Goyt Forest to reach Windgather Rocks. There were quite a few folks out today and it seemed most wanted a photo taken standing on the edge of the rocks. We were no exception and after a few poses were made for posterity we carried on, but not before spotting a group of climbers below us who were enjoying ascending the rocks the hard way. 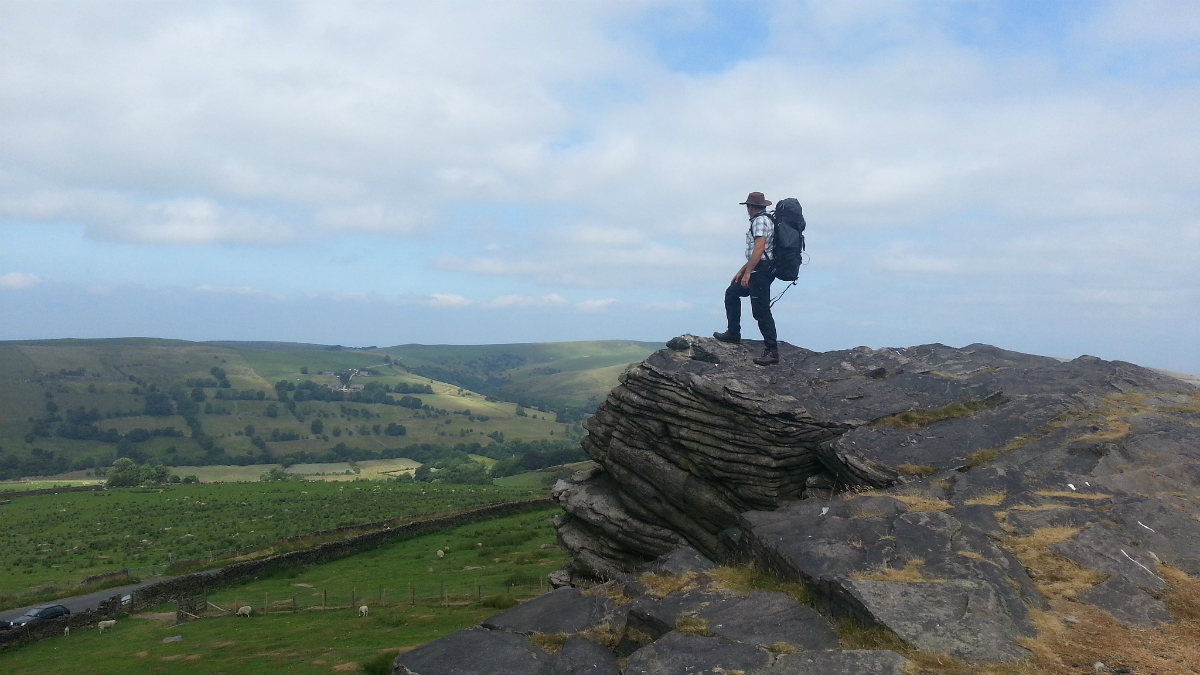 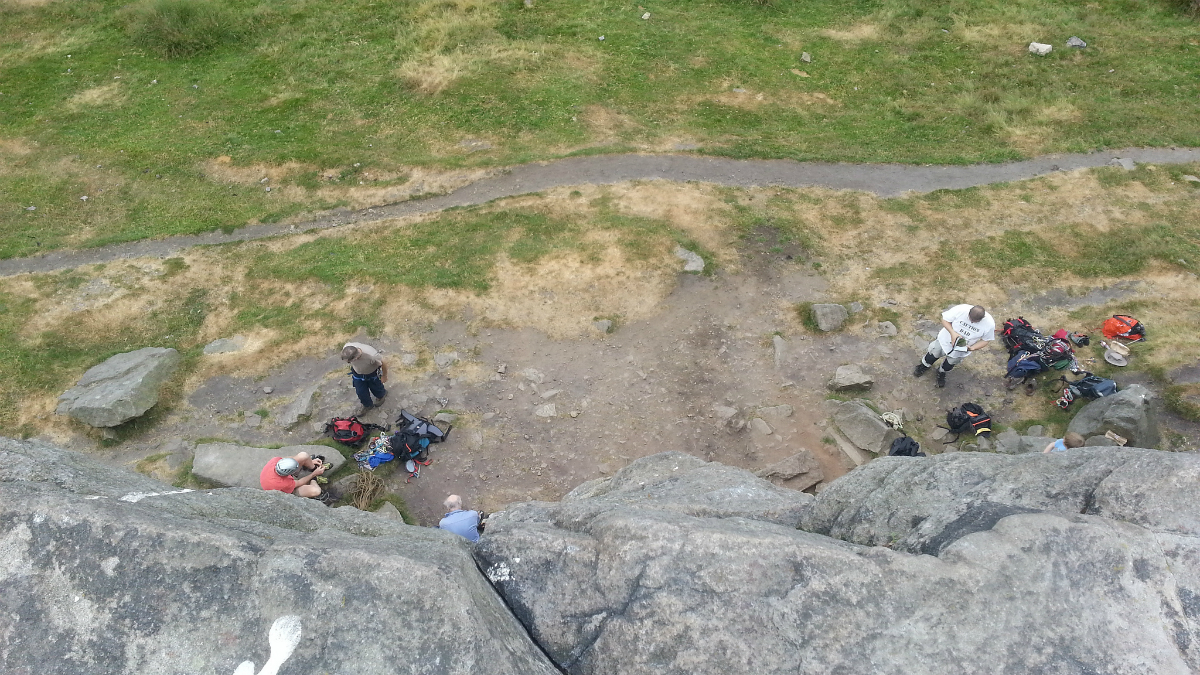 Turning east we reached Crowhill before heading north again joining the Midshires Way towards Horwich End, Whaley Bridge, passing the old church in Taxal on the way. Our desire was to find a pub in Horwich End for midday lunch and a pint and we weren’t disappointed. We found The White Horse which, although didn’t offer anything other than bar snacks in the way of food, did serve a good pint. The landlord kindly said we could bring food into the pub and as there was a fish & chip shop a few yards from the pub we ended up eating a chippie lunch washed down with good ale in the beer garden of The White Horse 🙂 An interesting fact about this 18th century pub is that one of it’s previous landlords, a George Pearson, served as landlord for 51 years between 1875-1926! (Source) 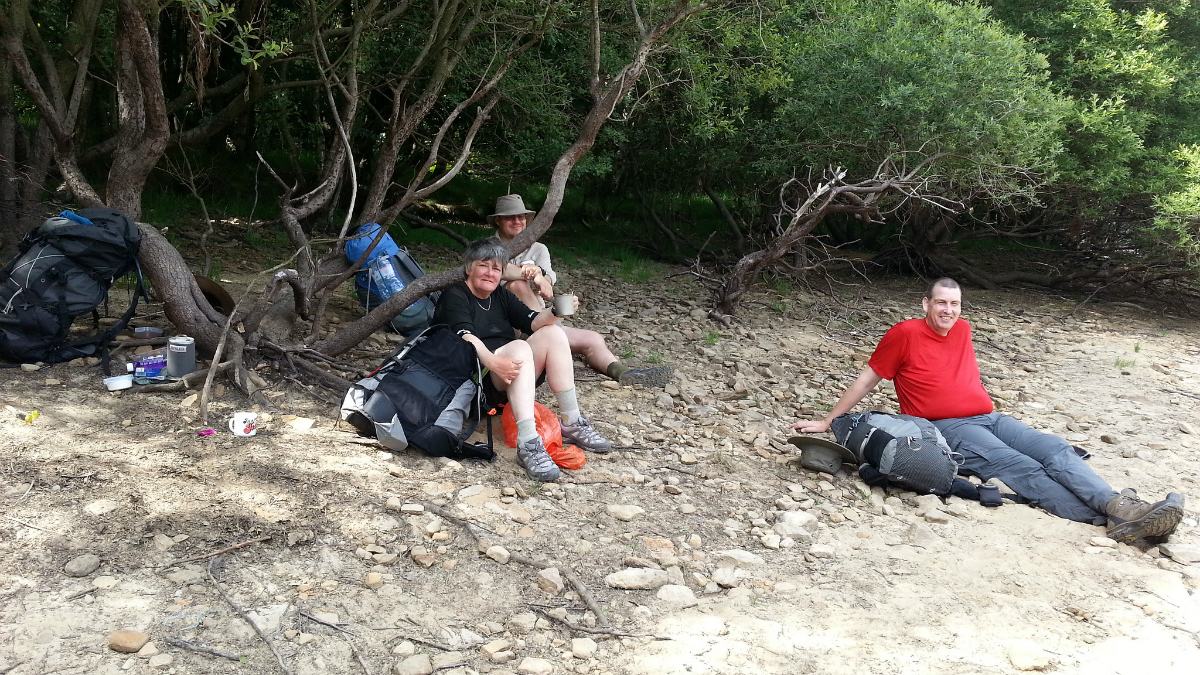 Refreshed we headed south to Fernilee, walking through Goyt Valley before stopping for a brew at Fernilee Reservoir. The reservoir was low and we found a delightful ‘beach’ to stop awhile and enjoy the afternoon sun. There were quite a number of folk picnicking and one or two adventurous souls taking a dip in the cool waters as we skipped a few stones and filled up our water bladders as we waited for our pots to boil. Sitting on the sandy shale in the company of good friends old and new with the sounds of merriment drifting over from families out for a day in the sun as I supped on my brew, I realised how lucky I was to be out on such a glorious day. I could quite happily have spent the afternoon on that reservoir beach. However, whilst we weren’t in any particular rush, we did need to walk a few more miles yet that afternoon so, donning our packs once more, we set off for the last leg of the days hike.

Listen in on us as we chat at the reservoir

Crossing the bridge at Bunsal Cob and with Erwood Reservoir on our right we headed on to Wild Moor, pausing to speculate at a blocked tunnel from an old disused railway. This was the toughest area of the weekend in terms of hiking ascent, but not difficult and I congratulated Stuart on creating such a varied route for this weekend’s adventure. We had hiked through fields and woods, alongside rivers and reservoirs, through valleys and over hills as well as passing quaint villages and over moors. I was enjoying it all immensely.
We had provisionally planned on camping at Cheeks Hill on Axe Edge Moor as there were a few intersecting walls near the old, disused quarry that would hopefully provide shelter from the winds that typically blow up on the ridges. However, after the short, but sharp ascent from Wild More to Burbage Edge, we agreed that we had had enough walking for one day and decided to pitch for our second nights camp – sheltering behind the wall, just off the pathway on Burbage Edge itself. We could see the Cat & Fiddle pub in the distance to the west of us and, after making camp, Rose once again bought out the Irish whiskey. Even if we couldn’t celebrate the days hike in a pub we could certainly drink to Rose for only her second wild camp in as many nights! My pitch was better than the previous nights and I was on flat ground sheltered from the wind by both the wall on Burbage Edge and by Stuarts tent 🙂 (The previous evening I had slept with my head in the lower foot end of my tent due to a poor pitch!) 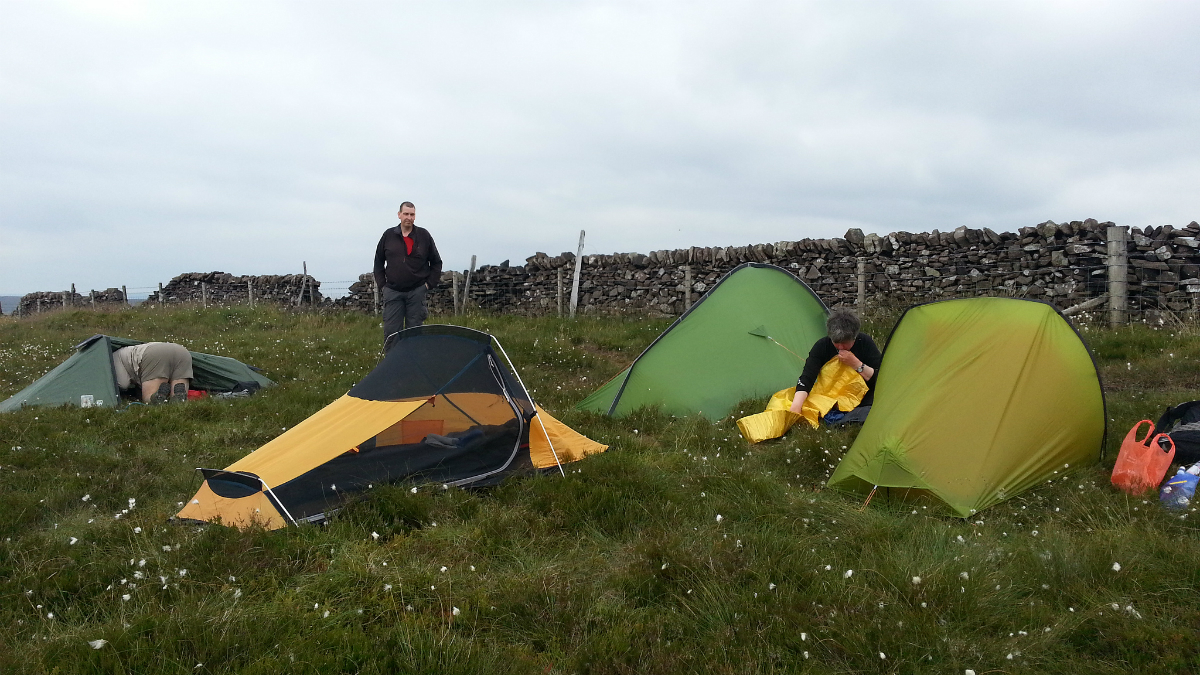 The next morning we set off to return to the Cat & Fiddle. We knew the pub offered food from midday and we had ample time to cover the last few miles. Reaching Axe Edge Moor, Matt, Stuart and I made a brief detour to ‘bag’ the peak as Rose continued on to wait for us further along the trail at Cheeks Hill. There is no path to the peak and both Matt and I ‘post-holed’ a couple of times traversing the soft, clumpy terrain. Catching up with Rose we were treated to beef jerky by Rose before continuing on around Orchard Farm and along the old quarry rail track where we spied the copse of trees known as Three Shire Heads.
“Three Shire Head (also known as Three Shire’s Head, Three Shires Head, Three Shire Heads) is the point on Axe Edge Moor where Cheshire, Derbyshire and Staffordshire meet, at UK grid reference SK009685, or 53.213°N 1.987°W.” (Source) 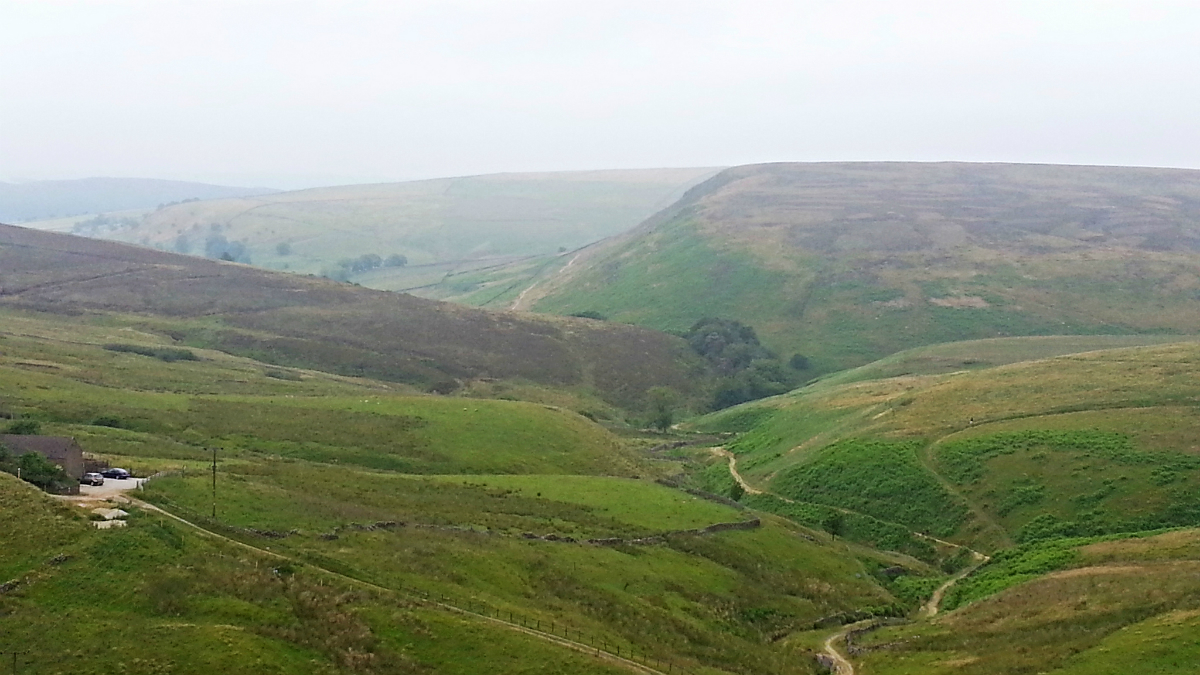 So now we only had a couple of miles to go and, after I took a wrong turn at the old quarry at Danebower, we headed back on track over Danebower Hollow where once again Matt, Stuart and I scuttled over Whetstone Ridge to bag the Dewey. We met up with Rose back at the Cat & Fiddle and, over lunch, reminisced over what had been a wonderful weekend. We three guys were honoured to have helped the delightful RucksackRose break her wildcamping virginity!

I used Viewranger to record and map our route.
(use slider to zoom in, click icons to see images)