Way back in 1982, at the tender age of 15, I attempted my very first long distance hike and backpacking adventure – The Pennine Way – England’s first designated National Trail. I was inspired by a man who has since become arguably the UK’s premier authority on long distance hiking and backpacking  Chris Townsend.  In the same year Chris, who had already completed the Pennine way some years earlier in 1976, was undertaking his first overseas long distance walk – The Pacific Crest Trail – and, over 30 years after becoming only one of 11 people to complete this epic journey of over 2,600 miles in 1982, Chris has written a book of his adventure; Rattlesnakes and Bald Eagles – Hiking The Pacific Crest Trail. This is my review of the book.

To write a book of events over 30 years after experiencing them is no mean feat – memories fade with each passing year – and I was as much intrigued to see how Chris (also knows as @townsendoutdoor on Twitter) would remember details of his journey after so much time had elapsed as well as of reading an account of what has now become such a well documented trail. What fascinated me most when I heard that Chris was going to write this book was reading about how the Pacific Crest Trail (PCT) was way back in 1982, a time when Ultra Light backpacking was barely an idea and when the PCT attracted people in their hundreds, not the thousands who now regularly make the attempt each year. Indeed the PCT of 1982 was, in many ways, a different trail than it is today some 33 years later and Rattlesnakes and Bald Eagles document some of the changes thanks to Chris’ continued interest in the trail.

“There were closer views of Mount Washington as the trail traversed its flanks before the day ended with a descent into the ghostly burned lodgepole pine forest, the stark dead trees pointing forlornly at the sky, that led to Santiam Pass, where a highway crosses the mountains, and Santiam Lodge, a combined Presbyterian Retreat and Youth Camp and American Youth Hostel, the only such one on the PCT  (and now long closed).”

And it’s this attention to detail that stands out. Chris kept a journal on his journey and refers to it constantly during the book. Every mountain, pass, valley and river is recalled and described in vivid detail and draws the reader into the changing landscape of the PCT – all the way from the trail’s start at the Mexican/American border to the American/Canadian border, a distance of over 2600 miles! Unlike a lot of books about long distance walks that focus on the author’s ‘personal/spiritual/life affirming’ experiences or concentrate on the people met along the way replete with anecdotes Rattlesnakes and Bald Eagles is firmly rooted in the trail itself. Yes there are anecdotes scattered throughout the book and Chris shares with us the experiences of meeting people along the way, but this book is all about the trail; the scenery, the conditions and most of all about the wilderness – something that Chris is most passionate about.

“A curious and slightly disturbing incident occurred during this climb. As I ascended one particularly steep section I could see a hiker sitting on the ground where it eased off. As I reached him he pulled aside his jacket to reveal a pistol in a holster and started talking about how he was ready to shoot anybody who messed with him. He said this while staring into space, almost as if I wasn’t there.”

Today, in this age of ultra-light hiking gear, it’s hard to imagine carrying over 25 kilos on your back for 2600 plus miles, but Chris carried 50 kilos at times on stretches of the PCT where there were no supply stops for 2 weeks at a time in places. And Chris wasn’t (and isn’t) a big guy. Also the PCT , as I mentioned earlier, was much less travelled and less developed than it is today and these factors, amongst others, makes Chris’ thru-hike all the more remarkable. Especially notable is Chris’ traverse of the snowbound High Sierras. In 1982 only 120 thru-hiker permits were issued for the PCT and only 11 finished, including Chris. One of the main reasons for hikers either dropping out or not thru-hiking the entire trail was the snow in the High Sierras. Although Chris had experienced winter hiking in Scotland before undertaking the Pacific Crest Trail, it makes compelling reading to read of his determination to tackle this section of the trail in extraordinary conditions. In fact, some of the 11 people who completed the PCT  did so only by taking a lower level route and missing the High Sierras entirely!

“For some reason when I reached the edge of the sunny section I decided to try and climb straight up the gully on the front points of my crampons. It was only about forty feet but trying to climb that distance up very steep hard snow at 13,000 feet with one ice axe, bendy boots and a pack weighing around 70lbs is not sensible. I managed though until a final corniced vertical section of soft snow stopped me. I could make no progress up this, sliding back as my footholds collapsed. I was stuck. Rescue came from above. Dave lowered down his ice axe on the 5mm line Scott was carrying, mostly for river crossings. I tied the cord round my waist and was belayed from above. With Dave and Scott heaving on the rope and by pulling up on the two ice axes thrust into the snow above me I managed to plough my way up to the cornice. A helping hand enabled me to squirm inelegantly onto the pass where I lay panting and very relieved.”

Siberian Outpost in the High Sierra 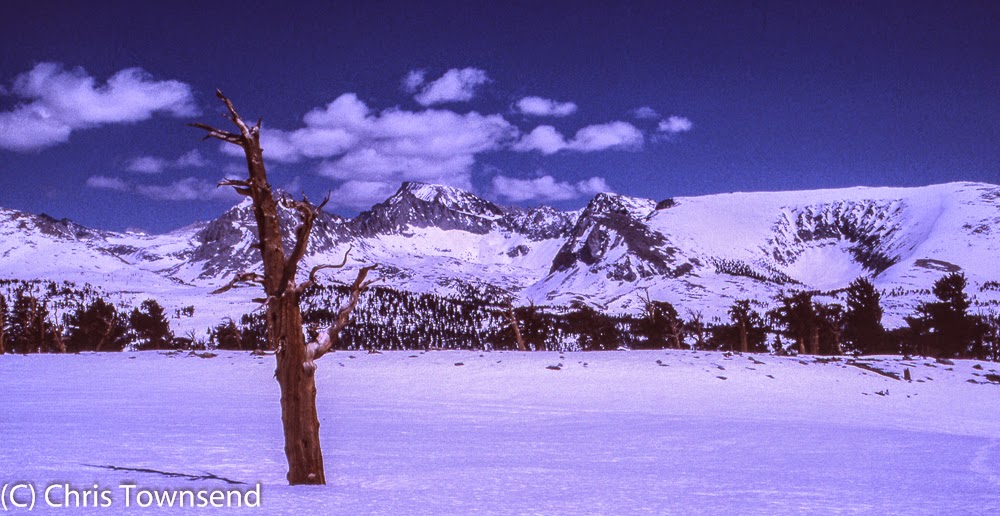 Rattlesnakes and Bald Eagles brings some of the history of the Pacific Crest Trail to the reader’s attention too, not only as a comparison to how the PCT has changed over the past 30 years, but also the trails origins and potential future. Chris’ passion for the trail – or more accurately, his passion for exploring wilderness through long distance walking – shines through this book. As the narrative invites the reader to join Chris on his journey through wild and beautiful scenery, it also details some of the flora and fauna along the PCT too – all of which exciteChris, and his enthusiasm for discovering new trees and birds especially is clearly evident. Unfortunately the Kindle edition of Rattlesnakes and Bald Eagles (which I am reviewing  here) doesn’t contain any of the photographs that are available in the hard copy of the book, however the descriptive style of Chris’ writing makes up for their absence.

“This was a well-used site and the local mice were obviously used to campers as they were very bold. One of them ran all over my shoes, garbage, pans and pack, examining each closely and coming within a few inches of me completely unbothered by my presence or the light from my torch. It seemed to have an unhealthy fascination for my sweaty socks and spent rather a long time sniffing them. Remembering the trail mix that had been nibbled at a previous camp I hung my food bag, which was fairly empty now, from a tree branch. As usual since the mosquitoes had stopped being a problem I slept with the tent door wide open. I woke suddenly in the middle of the night with a sharp pain in my head. A mouse was tugging at a strand of my hair! I sat up and it raced away. Not wanting such a shock again I zipped the door shut. I’d survived rattlesnake country and had no problems with bears. I wasn’t expecting to be molested by a mouse.”

There is a sense of wonder in Chris’ writing that, even after over 30 years since the story of Rattlesnakes and Bald Eagles began, is still movingly evident to the reader. You get the feeling that as Chris wrote this book the memories of his life changing journey brought back emotions and that sense of awe he obviously experienced at the time of his hike. The book is more than simply a recollection of a long ago journey, it is an insight into a a 33 year old man’s growing lifelong passion for the outdoors (Chris celebrated his 33rd birthday during his PCT journey); a passion that hasn’t diminished over 30 years later. But not only does Chris share the majesty and wonder of his journey he also shares those times when his moral was low – after all, thru-hiking over 2600 miles is bound to have less than ideal situations too – and whilst these moments are rare (Chris is ever the optimist) they certainly help balance the book and show that even the most intrepid hiker is subject to loneliness and despair at times.

“For once I was very glad of company as conversation was a distraction from the appalling mess around us. Greg had started the trail on March 12, three weeks before me, and had indeed set off into the High Sierra. However he’d soon retreated on discovering how much snow there was. Determined to do a continuous hike and not wanting to trudge up the road in Owens Valley he’d headed east across that valley and then hiked along the White Mountains that paralleled the Sierra Nevada. He’d been inspired to do this by Colin Fletcher’s The Thousand-Mile Summer as that was the route Fletcher had taken. This was the book that inspired my walk too of course and we enjoyed discussing it. I thought heading for the White Mountains had been imaginative and adventurous and felt that Greg was a backpacker after my own heart. Meeting him restored my morale on a day when it was declining rapidly.”

I really enjoyed Rattlesnakes and Bald Eagles: Hiking the Pacific Crest Trail by Chris Townsend and of the 22 hiking related books I read in 2014 it is certainly in my top 3 reads of the year. My only real criticism is that the Kindle edition of the book which I have doesn’t contain any of the photographs found in the hardback version. However, If you are a fan of Chris’ books then Rattlesnakes is certainly required reading and if you’re new to Chris’ writings then this book is certainly a good introduction to this great man’s adventures. Highly recommended!

“I sat in the tent watching the trees and the sky and thinking about my long journey. I knew it had to end. I knew too that I wanted to do more walks like this. The satisfaction had been intense. The pleasure enormous. Some may concentrate on the heavy loads, difficult terrain and aching feet and think that long distance walking couldn’t be really enjoyable. I couldn’t imagine anything I could enjoy more. This, for me, was what life was all about. I thought back over the walk, back to the Mohave Desert and the heat, the High Sierra and the snow, Yosemite and the snowmelt creeks, marvellous Crater Lake, the endless rich forests, the beautiful mountains – Shasta, Jefferson, Glacier Peak -, the wildlife, the flowers, the narrow trail winding ever onwards through the wilderness, and shivered with delight. I would be back. On the trail anyway if not the PCT”